Garuda Linux - Distro I have always dreamed of!

Garuda Linux is an Arch-based Linux distro, and it seems to be the new hotness. Is it rightly so? Let’s find out!

Garuda Linux has graphical programs for managing almost all system settings. It builds on top of the Linux-zen kernel which is optimized for desktop, multimedia and gaming performance. Furthermore, it features ZRAM, CPU scheduler, Nohang and Ananicy. It also has Timeshift configured with Btrfs snapshots out of the box, which gives us the ability to revert any system update in case of errors.

Sounds like a dream come true for everyone, ranging from normal users, all the way to “tech-savvies”.

Is it indeed so? Let’s find out! 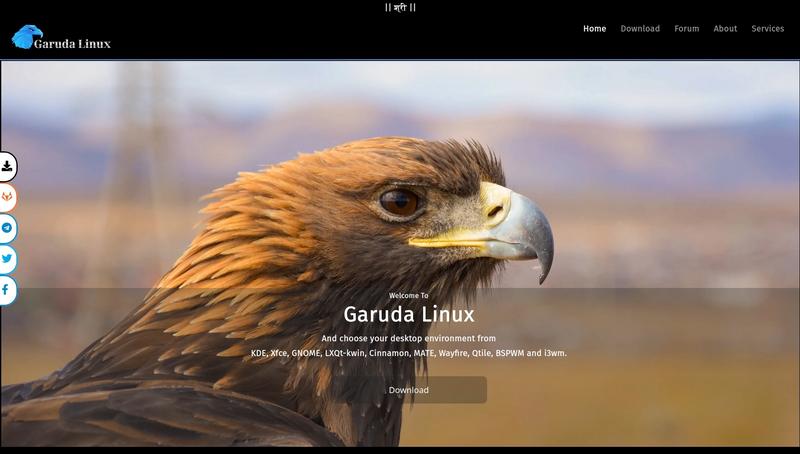 Garuda Linux has a ton of flavours that we can choose from. The standard ones like GNOME, KDE, XFCE are included, but we also have quite a few niche environments like QTile, BSPWM, Wayfire, and i3wm.

I have been the most attracted by these editions. This was the order I tried them, so I will present them as it was during my experience with Garuda Linux. 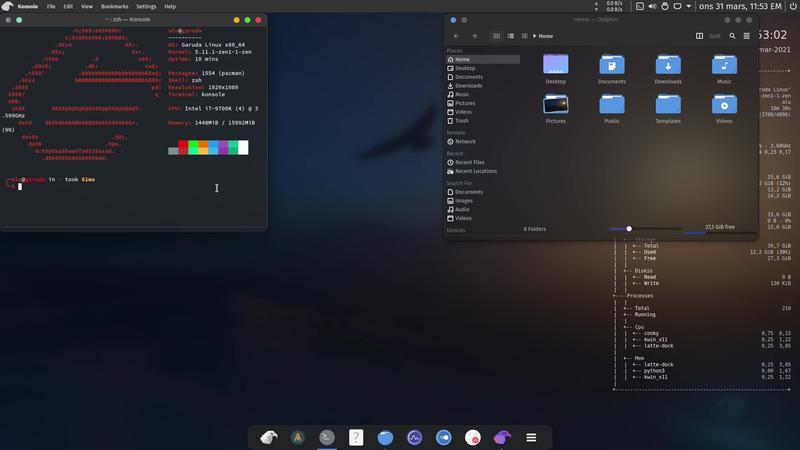 Garuda Linux ships with a modern Calamares installer which makes installation very easy. However, installing Garuda Linux was a very slow process for me on all 3 distro editions though I do have powerful hardware.

All my hardware, including the combo of intel + Nvidia graphics, bluetooth, wifi, everything was recognized out of the box. No issues, and no complaints. 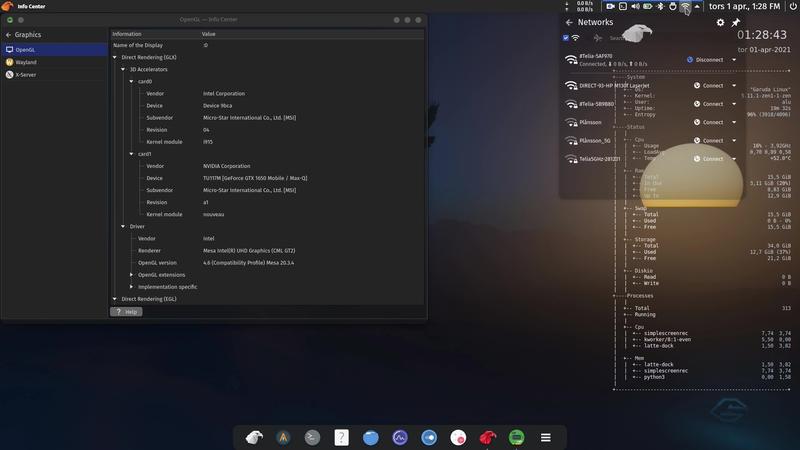 Out of the box, every part of the system is tweaked. Looks quite nice and very different from all other Linux distros.

I really appreciate this attention to details by the Garuda developers. The shell look is indeed very nice and it is also very efficient to use.

After the installation, it prompts us to start a post-installation setup assistant. However, I didn’t want to use it immediately. I needed a screen recorder first to capture everything in action for my video review.

Surprisingly, I tried installing SimpleScreenRecorder, and the installation failed with some strange messages. Actually, with no messages. The pop-up window was empty as you can see: 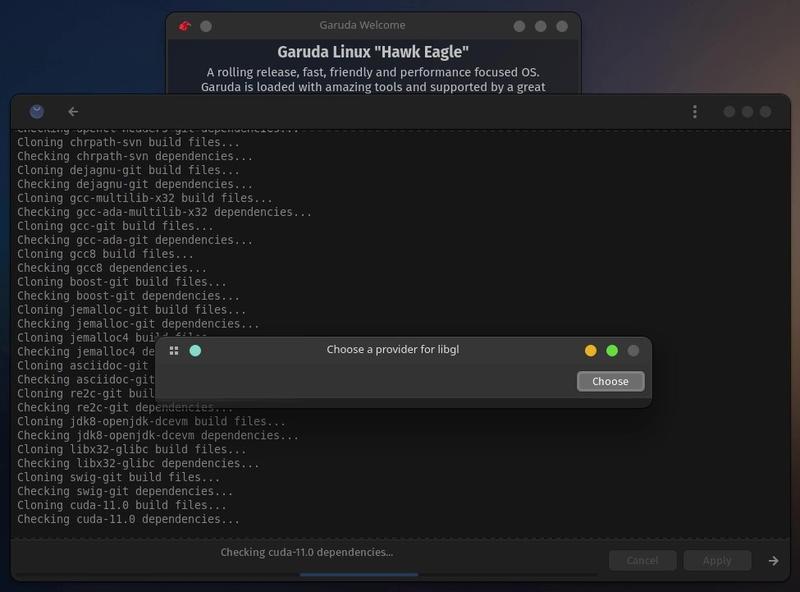 Using Garuda Assistant, I tried installing proprietary drivers for my hardware, but it failed.

Next, I tried updating the system, and you guessed it - failed again, for the third time in a row. Having had enough errors in the GUI, I’ve decided to go with a bullet-proof way - the command line. On that note, the system kept freezing all time during the updating process. I could not do anything during the update.

But again, it’s not because of inferior hardware. The CPU load was only about 25%. I ran updates in KDE Neon and OpenSUSE on the same hardware, and I never experienced any freeze. It is always fine to use the system while it’s being updated, but it is not the case for Garuda KDE Multimedia edition.

Eventually, the updating process failed in the command line as well (terminal opens when you click System update in the Garuda Assistant), which is a strong signal that something is very wrong with the whole distro, not just with the graphical interface. 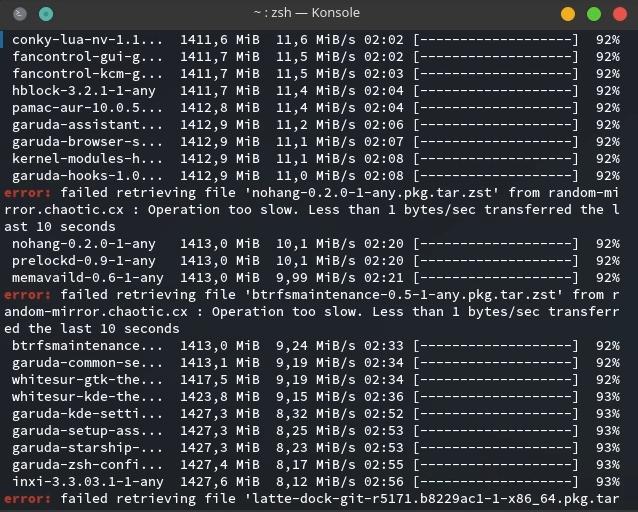 I tried to update the mirrors list with the graphical program. It did not work. Window just quickly closed and I was not able to see what was wrong.

I rebooted the system, only to find it worse than the first time. 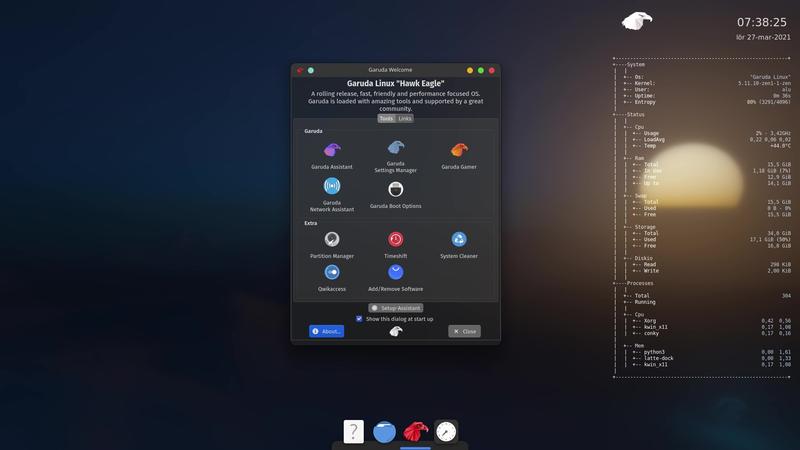 I quickly reached for Timeshift, but the restoration failed. Sadly, having experienced so many issues, I realized the distro is completely broken and cannot be used for any type of work.

There were many other smaller issue such as that there was a Firefox icon in Latte but Firefox was not installed but they do not matter as much if the system is completely broke after the update.

I decided to try another flavor of Garuda Linux - Garuda Wayfire. 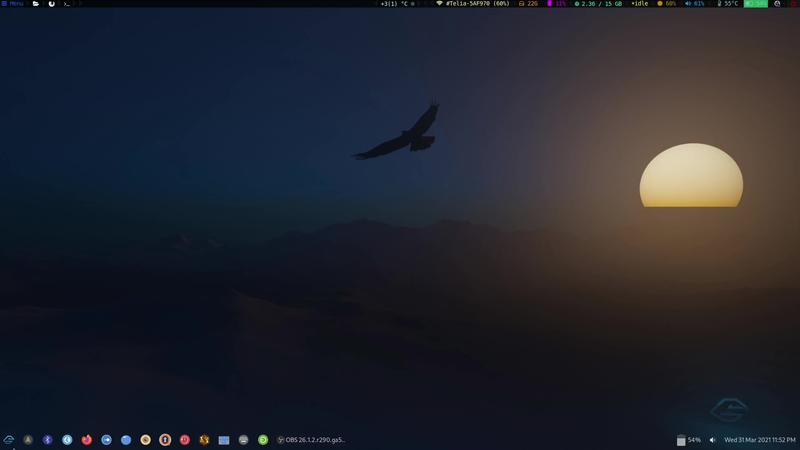 Garuda Wayfire claims to be a distro with a lightweight environment, but still maintaining that beautiful look and feel. Speaking functionality-wise, let me be straight right here, it performed just as bad or even worse than Garuda KDE Multimedia.

Installing Nvidia drivers, just like in Garuda KDE Multimedia didn’t work. Updating the system also was not smooth. Many errors appeared in the terminal screen. 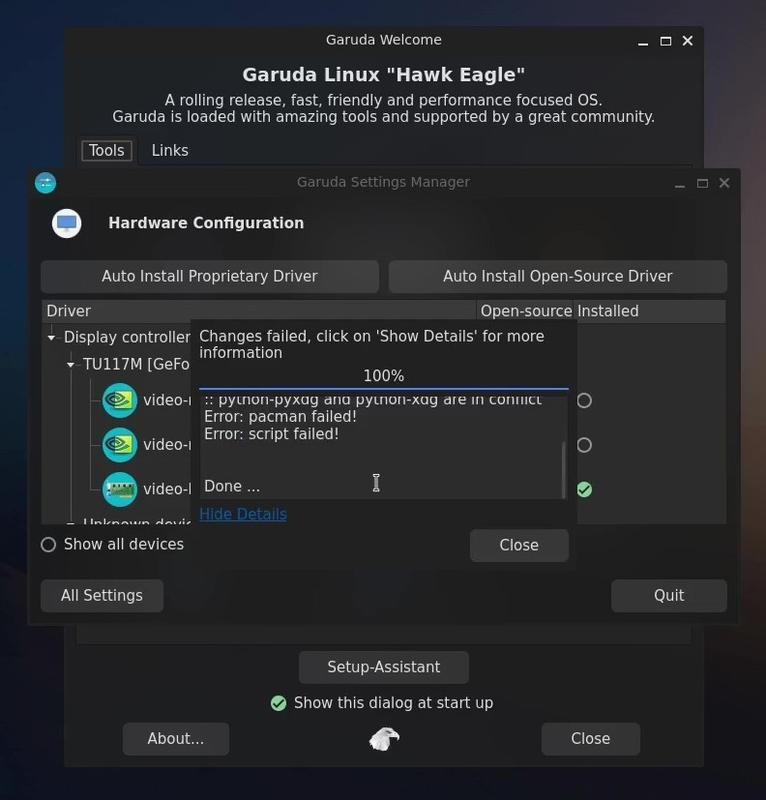 Of course, one could use the command line to install it and fix the errors, but the whole point of using Garuda is to get everything solved easily with the Garuda assistant app which doesn’t work.

So, Garuda Wayfire still has all major problems as Garuda KDE Multimedia edition does. And the Wayfire desktop environment brings more issues.

We need to open a text editor from the menu and use its opener to open a file. It is already a major problem. Imagine doing so many steps every time you open a txt file.

The top panel is not so useful. It only displays the information. It took me some time to learn how to configure Wi-Fi on Garuda. Clicking on the Wi-Fi icon does nothing. We need to open the Conman app to configure Wi-Fi.

The volume can be adjusted on the bottom panel, but we can’t mute/unmute. Funny enough, the sound is muted by default in Garuda Wayfire. We need to open PulseAudio settings to unmute it. 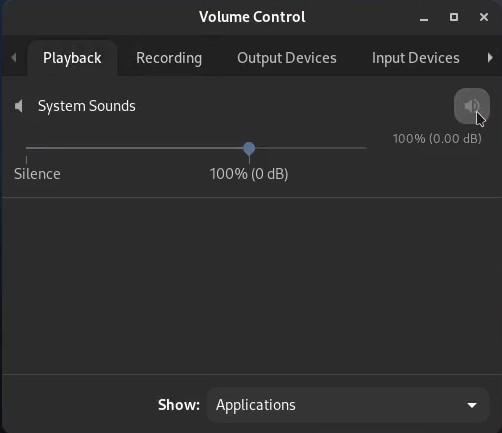 As my regular test, I tried playing a video. Garuda Wayfire uses Celluloid as a video player. Yes, you guessed it again, it didn’t work. In fact, the whole desktop crashed! It happened every time for every video format I tried playing.

Don’t get me wrong, I can accept an app crashing. It can occur on any OS (e.g. kdenlive crashed at least once while I edit a video), but when the app crashes the whole desktop, it makes the distro impossible to use for any work.

However, I installed VLC, and VLC works fine.

It was enough for me to stop using Garuda Wayfire. 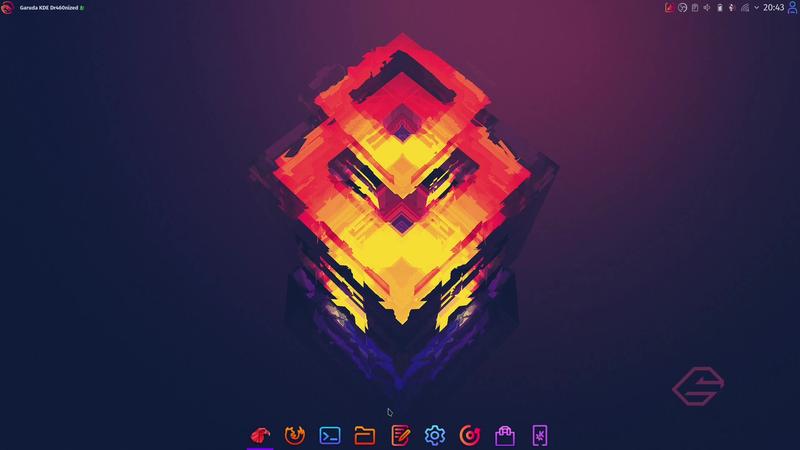 I almost gave up on Garuda Linux. But I thought these Garuda distros were secondary editions. Maybe their main distro Garuda KDE Dragonized is more polished and works better. I decided to do one more try with the flagship of Garuda Linux - KDE Dragonized edition.

To my surprise, everything worked!

After the installation, I followed the setup assistant and the system updated successfully. It also installed proprietary drivers automatically. 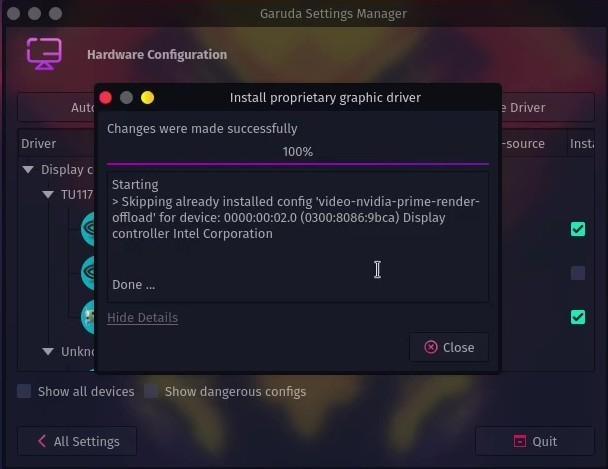 All Garuda system programs worked flawlessly. I tried all of them, except gaming tools, since I am not a gamer.

The desktop theme is quite nice, but I wouldn’t recommend it for work. All those shiny colours/transparency is distracting. 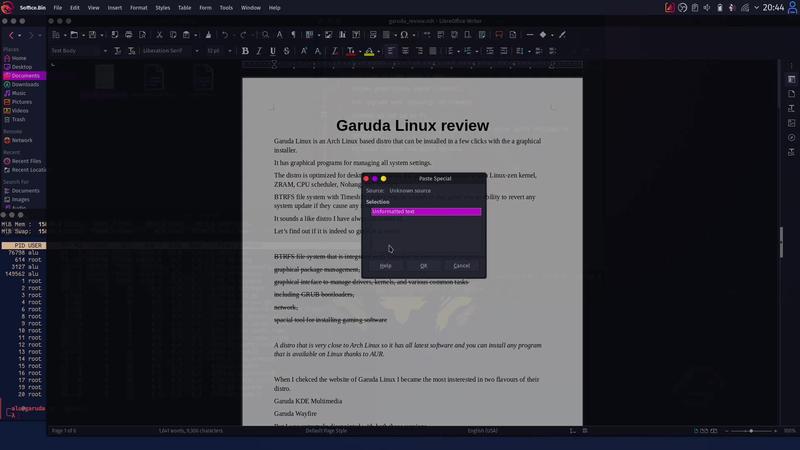 Garuda Linux also advertises itself as a performance-focused distro, but I didn’t feel any of that. Quite the contrary, to some extent. For example, boot time is very long. I run KDE Neon on the same machine, and it boots noticeably faster. Shutdown time is also longer.

Maybe Garuda Linux has an edge on gaming but I am not a gamer and I did not try Gaming tools. I think I cannot give a proper assessment of the gaming experience.

It’s worth mentioning that all Garuda editions are bloated with software. I appreciate having a few pre-installed Linux apps for day to day work, but I don’t need two different text editors. Garuda Linux has Kate and Mico preinstalled. There is Konsole and there is Alacrity terminal apps. There are also many specific apps which I believe will never be used by an average Linux user.

However, there are some fantastic apps pre-installed. For example, I discovered for myself Flameshot, a very feature-rich screenshot tool. I also like that they recommend SMPlayer for a video player. It is my favorite video player for the Plasma 5 desktop.

If you would like to try Garuda Linux, my advice would be to use only the KDE Dragonized edition. It’s not a dream distro, far from it, but now at least you have a clear picture about Garuda Linux.

As an Arch-based Linux distro, I expected it to be minimal. This way, it maintains stability and good performance. However, nothing will stop you from installing vanilla Arch with our complete, step by step guide on installing Arch Linux.

Lastly, what are your thoughts on Garuda Linux? Have you tried any other editions, and most importantly, did they work? I am curious to learn about your experience! 👇

I have an older gaming laptop with an 8th Gen i7 and a GTX1060. Garuda Dragonized at least on my system felt sluggish in the GUI. I have had no problems with Garuda Gnome, working well, and very smooth/performant in Gnome.

I had some problems with the boot but I deleted q4os I just felt this must be better so I wiped the full disk. It has everything I need. the best distro I have ever used. It is nothing for the Linux whiners, no system D, no wayland, no pipewire, etc. I have limited resources like Intel Celeron, 60 GB, a very cheap laptop and it works like a clock, fast, beautiful, efficient and the Linux I allways dreramed about, The Linux on the desktop, the Linux of the future. Maybe you should try the graphical possibilities instead of the terminal it is the point of this distro, userfriendlyness, and I am not a robot understand this, do not insult me please. If you have caphta problems they are not mine. I AM NOT A ROBOT. IS THIS A LINUX USER FRIENDLY SITE.