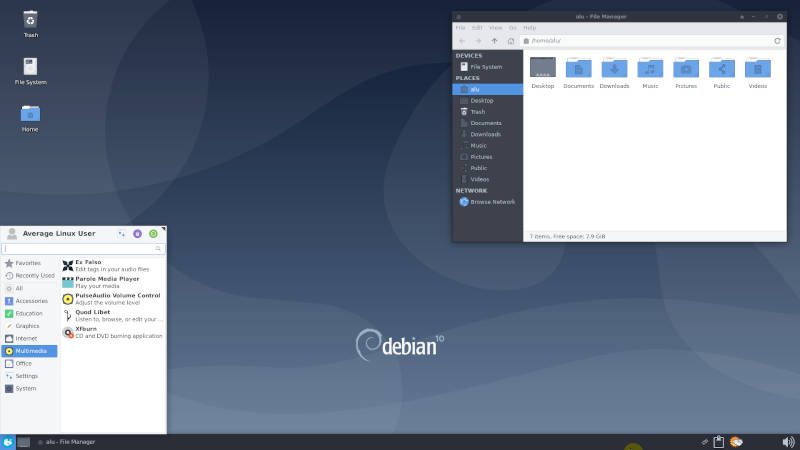 This blog-post is sponsored by UpCloud. With UpCloud, you can deploy a private Debian server with just a few clicks and start using it:

Debian never uses the latest versions of desktop environments. You will be losing many new features if you run Debian with GNOME, KDE, or Cinnamon. These desktop environments will be already obsolete at the time of Debian release. But in Debian XFCE, you get pretty much the same features as in any other distro with the XFCE desktop. XFCE is not updated often.

Also, you get stable and reliable XFCE on top of rock-solid Debian base. 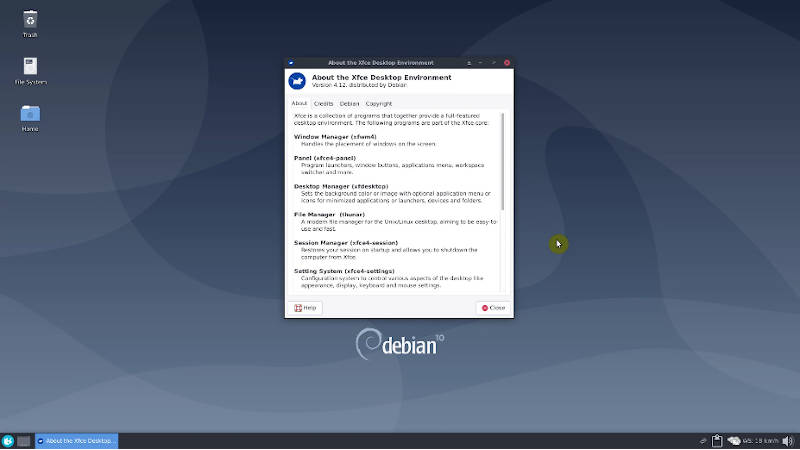 Before testing Debian 10 XFCE, I thought I would argue the same. It seems like it is better to use some distro with the latest XFCE instead of Debian. And Manjaro XFCE was the first distro that came to my mind. But after looking at XFCE in Manjaro and Debian, I can conclude that XFCE has not changed massively. So, Debian 10 and XFCE 4.12 is still a great combo.

The other changes of XFCE 4.14 including the transition to GTK3 are great but it is not something large to discard XFCE 4.12. You may also experience some glitches with XFCE 4.14. But glitches are unlikely to happen in XFCE 4.12.

Both XFCE and Debian are lightweight. This makes Debian XFCE one of the best distro for old hardware. 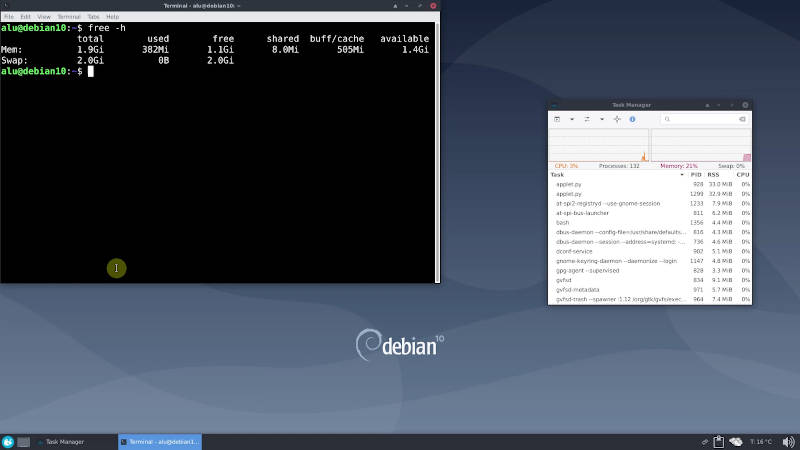 There are desktop environments that are lighter than XFCE but they compromise some functionality in my opinion.

Debian also doesn’t pre-install many packages in its XFCE flavor, unlike in Debian KDE, which I reviewed previously.

I use Debian XFCE on my now 8 years old laptop. It works as good as when I just bought it.

Also, as I mentioned in my Debian 10 GNOME review, Debian 10 is one of a few Linux distro that still supports 32-bit systems. So, in some cases, Debian 10 XFCE can be the only solution for old hardware.

XFCE is light and can look awesome. 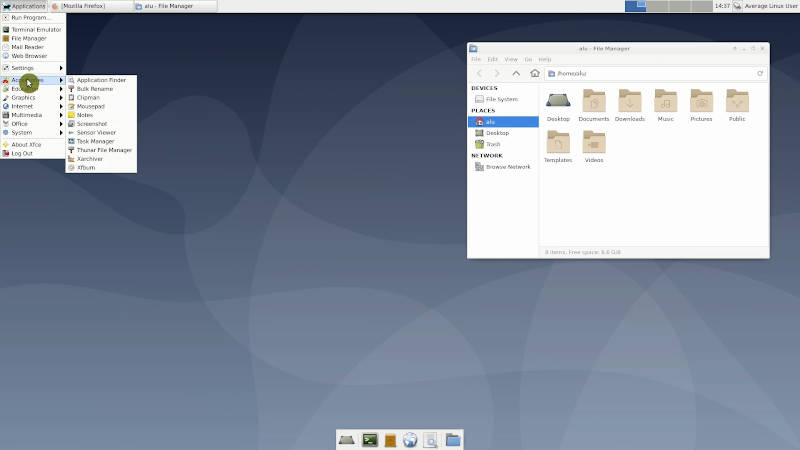 However, you can make XFCE look awesome: 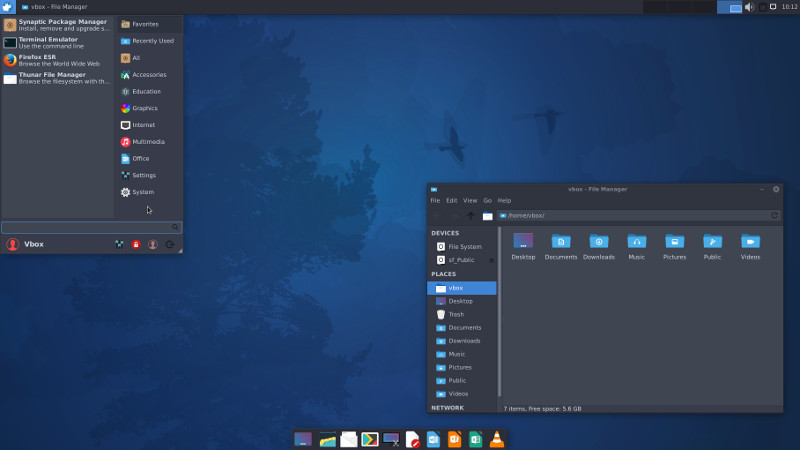 XFCE may not be attractive at first glance but it is highly customizable.

You can change its menu to a more modern one: 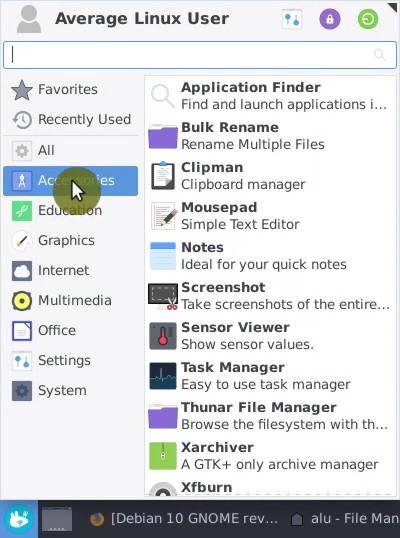 You can also get Windows-like icons taskbar: 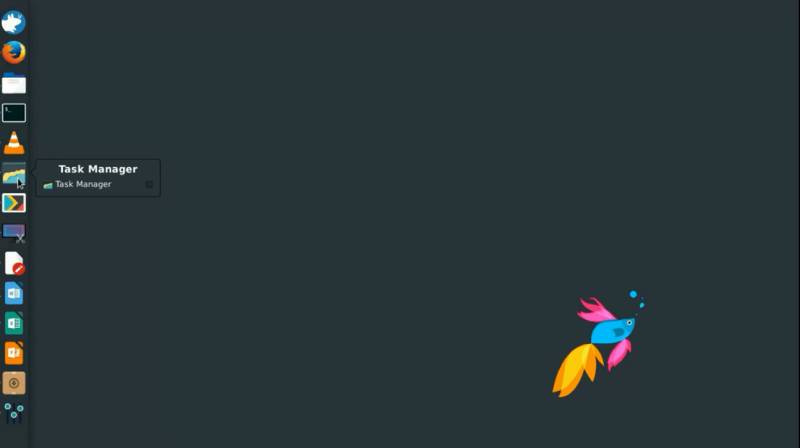 You can transform the XFCE panel into a dock:

You can even make XFCE terminal to drop-down on a keypress: 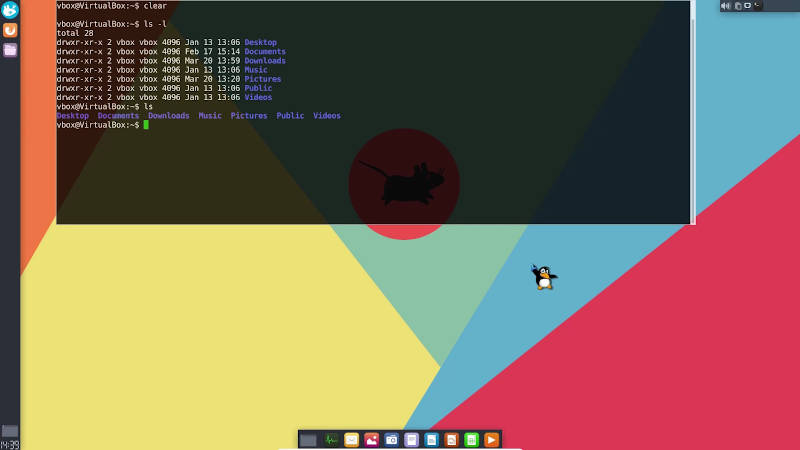 And all of these comes with almost no prices in terms of resources.

Both XFCE and Debian provide stability, reliability, and performance. Debian 10 XFCE is still my favorite Debian flavor and the best XFCE distro overall.

Among other flavors of Debian 10, I also liked the GNOME version, read my Debian 10 GNOME review if you have not yet.

Average Linux UserFollow I am the founder of the Average Linux User project, which is a hobby I work on at night. During the day I am a scientist who uses computers to analyze genetic data.
« Debian 10 KDE review 30 Things to Do After Installing Debian 10 »

Debian10 XFCE looks like a shit. The default XFCE is better.

which one should i choose mx or debian ? as part of studies i might be need to learn web and i would like to learn about linux, i’m a cs student . thanks in advance alu , your videos are awsome :)

If you are not sure, go with MX. And definitely try Debian some time later. Here is my installation guide for debian

Thanks for sharing this.

I prefer Mint for Cinnamon. Cinnamon is developed by the Mint team so it works the best on Mint.

MX is fine. If you get bored, try Debian XFCe.

Hi. I have a older PC like this: Intel DB75EN, 12 GB ram, and SSD of 240GB, it's an i5-2400 old generation at 3GHZ. It has integrated graphics. I'm really sick of Windows 10 high CPU usage and want a change. Do you think Debian could run fine in this PC? I like Cinnamon and Mate better than XFCE. Will they run?

Hi John, Yes, definitely Linux will work fine and much better than Windows on such hardware. If you like Mate, install Ubuntu Mate. It is extremely polished and lighter than Cinnamon.

Hello my friend Which desktops do you recommend for Arch Linux? Do you also recommend this desktop on Arch Linux? Please explain or not

I think XFCE is the best for Arch. It changes little overtime, so it is more stable than any other desktops. But if you maintain you Arch well, other desktops work fine too.

Great video and articles!! Keep up the good work! We are waiting of top things to do after installing Debian XFCE and maybe later a video for MX Linux 19!

Thank you, Panos. I have MX Linux in mind for a long time. I just cannot find time to review it. But I will

Dear ALU, Your posts are very help full. I am using Debian 10 XFCE; and Debian 9 XFCE before that. I tried to upgrade from Debian 9 to Debian 10, but it was a failure. I wish there were good and simple guide on how to upgrade Debian.

You may not like my answer. I always reinstall major versions of any fixed release distro. It's little extra work. But it's the most reliable way.

As a complete neophyte in such matters I ask: does this mean literally overwriting everything in the relevant partition(s) or even the entire drive, reinstalling the o/s, reinstalling applications, changing settings for printers, scanners, other devices, tweaks for file managers, Gimp and plugins, plugins for Office suite, configuration of and bookmarks for web browsers etc etc? I would be appalled if that were so, since it is the sort of thing I personally might be prepared to do with MS Windows say, once every ten years i.e. only after they have stopped putting out security releases and I am forced to change the o/s.
I'm still using Windows 7 and have updated my image backups in preparation for going dual boot with probably Xubuntu or Debian for internet access and keeping Windows 7 for work unless/until I get acclimatised, but the idea of having to re-create the system every couple of years is too appalling to contemplate - almost as bad as going to windows 10! Am I labouring under a misapprehension? Is a “reinstal” actually something less horrible to contemplate? Would a brief article explaining be worthwhile? ;)

Yes, I reinstall root partiton (/) but I do not touch the home partition (/home) where all the settings are. I also need to install all apps, but it can be easily done with one command because back up the list of installed programs before the backup. However, there is no need to reinstall if you are not willing to spend time doing so. Try to upgrade first and in most cases it works fine.

Hi Marvin, Thank you for your support. I do my best to produce this content regularly.

Hi ALU, what's the name of the icon theme you are using in xfce here?

It depends when. I used several different themes here. Have a look at my XFCE customization post where I present different icon themes.

Toffee-gtk-theme is a flat Material Design theme for GTK 3, GTK 2 and Gnome-Shell etc.