How to Install Linux Mint without a Bootloader

Linux Mint installer has no option NOT to install a bootloader by default. But you can change that.

What is a Bootloader?

So, if you already have a Linux system installed, you also have a bootloader. If you decide to install a second Linux system on a separate partition, you can either overwrite the existing bootloader or keep it and install the system without a bootloader. The rule of thumb is to use that bootloader which is the latest.

But if you know what you are doing and you want to install Linux Mint without a bootloader, you need to start the installer from the command line. The Linux Mint installer is called ubiquity. Ubiquity is the installer in Ubuntu and all its derivatives. To see all options available in ubiquity, run:

Among these options, the option -b is what you need. It will install the system without a bootloader.

And when you get into the partition setup, there is no bootloader option you have seen before.

I installed Linux Mint without a bootloader this way and everything went as it supposed to. I can also confirm that this approach works for Ubuntu and KDE Neon. So, ubiquity with the option -b should work on Ubuntu and all its derivatives.

After this installation process, you will need to update your bootloader, so it can see the new system. Also, you need to make sure that the partition with a newly installed system is mounted during the update. For example, if you installed the Linux Mint system without a bootloader on sda2, mount it:

Please, leave a comment below if you use any other distribution and the command to update the bootloader on your system is different from the above commands. I will add your command here.

Average Linux UserFollow I am the founder of the Average Linux User project, which is a hobby I work on at night. During the day I am a scientist who uses computers to analyze genetic data.
« Make Xfce look modern and beautiful Dual boot Arch Linux with another Linux (os-prober) »

I’m using a HDD switch for a dual boot. I bought a used one from ebay. It arrived DOA unfortunately. I still prefer the control it gives me to the lack of control my ignorance of software results in. I’m a carpenter and cabinet maker. Thanks for the genetics work you do. It has made diagnosing my wife’s CLL and her treatment much better

Please help me bro when I tried to install linux mint at the final moment it says grub failed install/dev/sda. #My laptop is very old with no os in it now Amd A4 4300m apu

It’s difficult to help with so little information. Have you tried the automatic partitioning of Linux Mind during installation?

This appears to have destroyed my system. Fortunately I was testing new Linux versions on a spare SSD rather than the existing Xubuntu 18 system so no data loss.

I had dual boot Ubuntu Mate 20.04 & Linux Lite 5.2 and wanted to replace the very Mate with Mint as Mate is not stable (freezes up too much). Followed instructions but got error failed to get Canonical path /cow when rebuilding boot from Live CD. Ended up wiping the lot and installing Lite. If Mint is so picky it can’t be installed dual boot with another Linux distro it really doesn’t deserve my consideration.

I am sorry for your experience. This is an advanced installation, and you need to understand why you need it. This tutorial is correct and if you did everything right, you would have had a working system. Installing Linux Mint without the bootloader alongside Linux Lite 5.2 could be done the normal way. You could just choose that option in the LM installer.

(reply to Average Linux User, but can’t find out how to directly reply to a reply ;-) )

Hi I’ll try that, the drive is still a test system and not the active one so I can still play about, (I’ll back up a drive image before I start this time!). I’ve burned the dvd, be a shame to waste it!

If I understand correctly choose the first “easy” option in the list rather than the last and let it do what it thinks is best without human interference mucking it all up.

My wife noticed it’s taken a lot of time to install a new Linux system that meets our needs. This is mainly was due to the first 2 being official lightweight Ubuntu installs which were unstable. Lubuntu has horrendous screen flickering even on logon and lacks easy user switching. Mate is fine until it suddenly locks up and needs a hard reset, which it did a lot.

I liked Lite though, very user friendly and feels quick even on a 14yr old laptop, so Mint Xfce will need to be quite good. Shows what a difference the flavour makes, all 4 are based on the same Ubuntu 20.04 LTS.

Yes, you choose the first option which should suggest you to “Install Linux Mint alongside Ubuntu” as on the screenshot below: 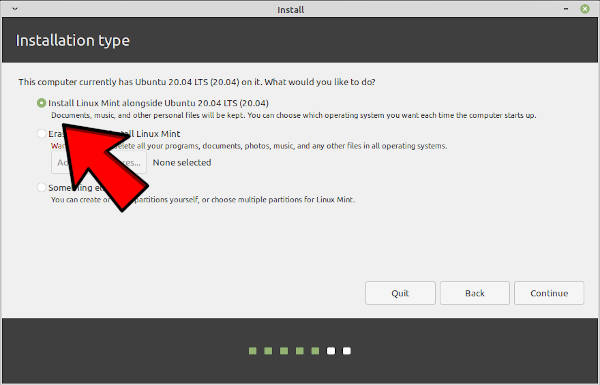 \r\n\r\n The problem is that this methods over-writes existing bootloader. Ubuntu-based distros work fine if you install them this way. But if you install very different ditros (e.g. Linux Mint and Arch Linux), a bootloader of one distro may not boot the other distro.

(reply to Average Linux User, but can’t find out how to directly reply to a reply ;-) )

I am still working on this commenting system. Thanks for pointing out this issue.

Now, there is a reply link under every comment.

i like the way you describe sir, i am successful installed 1 os along side arch linux , but if i install extra os i have to install in same procedure by mounting device root files with mnt folder .then doing grub config will help to show 3 os on bootloader or not.

If you do the installation without a bootloader as described in this article, then yes, you need to re-configure GRUB.

Thanks for article dear admin.

Finally I have found the -b switch! Thank you. My previous work-around was to set the GrUB install to the same partition as the new OS install. This does not mess with the MBR GrUB. There is an easier way to get GrUB updated. Just reboot into the original (main) linux OS and perform sudo update-grub. This will find and add the new OS install automatically.

Yeah… I also struggled before I learned this -b option. That's why I share it here.

Great article. My work as a computer repair tech has supplied me with a lot of laptops and desktops. I have a dual boot configuration on all of the systems I currently have set up. Linux Mint is one of the staples of those set-ups and this article was very helpful. I have found the steps can be applied to work with other Ubuntu and Debian based distributions, albeit with occasional modification. Very cool.

You are right. It works with all Ubuntu based distros because they all use ubiquity installer.