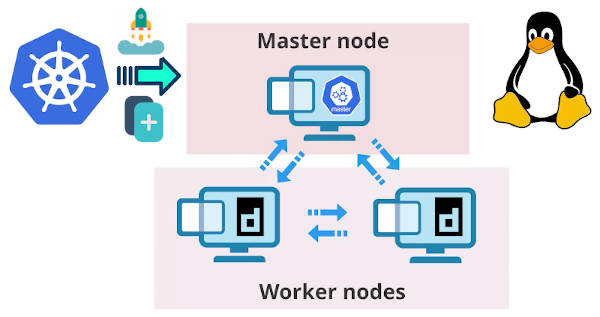 Follow this blog-post, and you will deploy your first Kubernetes cluster with ContainerD. We will use ContainerD instead of Docker because Docker is to be deprecated from Kubernetes. We will build a cluster of one master and two worker nodes, but you can scale it up to more nodes if needed.

I like how Gordon Haff, a technology evangelist at Red Hat, explains Kubernetes:

Kubernetes is an open-source platform that automates Linux container operations. It eliminates many of the manual processes involved in deploying and scaling containerized applications. In other words, you can cluster together groups of hosts running Linux containers, and Kubernetes helps you easily and efficiently manage those clusters.

Kubernetes is used with containers to avoid all the dependency problems. Likely you will see Kubernetes used with Docker as a container runtime interface, but Docker is to be deprecated after Kubernetes v1.20. So, we will use Kubernetes with ContainerD that is a more up-to-date way to run Kubernetes.

What you will learn

We will create a simple setup of one master node and two worker nodes. But of course, you can use more nodes if needed.

We will install Kubernetes on these machines and make them talk to each other. Kubernetes will act as an orchestrator.

We will deploy an application on this Kubernetes cluster and test some of the key features of Kubernetes, such as

To create our master and worker nodes, we need three servers. You can use any cloud server provider that offers an option to create a network of servers.

I will be using Serverspace.io, a sponsor of this blog-post. Serverspace offers cloud infrastructure for any digital project including a Kubernetes cluster. It bills you in 10 minutes increments. Hence, you can use a VM for 20 minutes and then delete it, and you will only pay for 20 minutes. Also, no linked credit card is required. So, it is perfect for testing.

Use the promo code AVERAGELINUXUSER to double up your first payment at Serverspace:

Let’s create a Serverspace infrastructure for our Kubernetes cluster.

We will start with creating a public network.

After the servers had been created, we can get their login credentials by clicking on them and checking the Status tab:

Furthermore, we can modify the configuration (add more CPU, RAM, storage) of these servers, restart/turn off them from this dashboard, create snapshots and enable backups.

Now, log in to each server by using the credentials from the Status panel:

To distinguish these servers, let’s change their hostnames to:

On each server, open the file /etc/hosts:

Add master’s and workers’ IPs, which you can get from the Serverspace control panel.

To remind you, use Ctrl + O to write the changes, and Ctrl + X to exit nano.

We can now use these names instead of typing the IPs.

After that, let’s assign a hostname to each of these servers.

Now, you should be able to see the server names in your terminal: 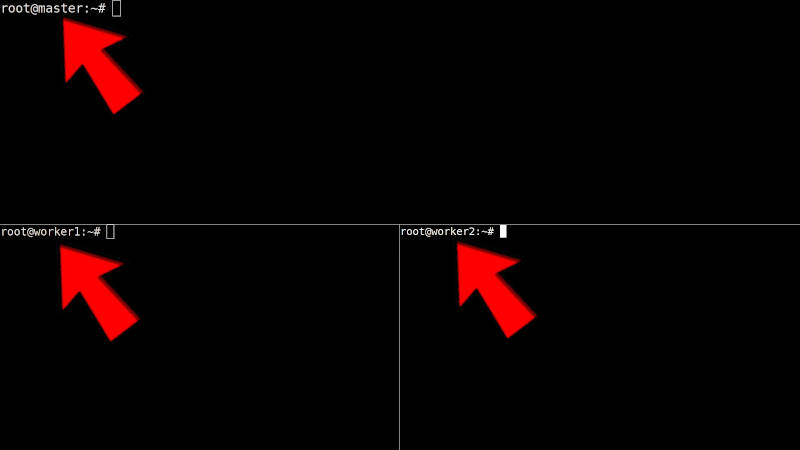 This will make it easier to navigate between different servers.

Next, we need to install software and perform the necessary configuration on each server.

To install Kubernetes and containerd run these commands:

apt-mark hold will prevent the package from being automatically upgraded or removed.

Load the necessary modules for Containerd:

And prevents it from turning on after reboots by commenting it in the /etc/fstab file:

We also need to add regular user because these are newly created servers which only has root as user. I will create ALU user and add it to the sudo group on each server: 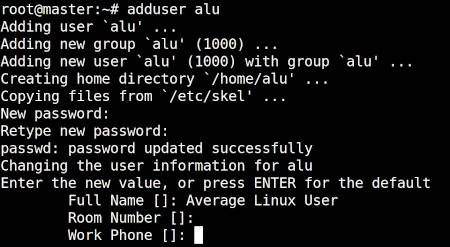 Make sure to check out our article on how to create a new user on Linux if you are unfamiliar with the process.

Now, we can log out and log in as a regular user, which is also a requirement to run some of the Kubernetes setup commands.

The servers are ready now. We can start configuring our master node.

We will create a Kubernetes cluster by running the following command on the master node:

The command takes some time to run (~10 minutes on my end), so after it’s done, make sure that you have a similar output to the one on the image below:

If you get an error that kubeadm could not find containerd automatically, specify it as Container Runtime Interface with --cri-socket:

Now, following the instruction provided in the kubeadm init output, configure the user to run kubectl on the master node:

Run the command for joining worker nodes. It’s a last line in the kubeadm init output and has the following format:

Here is how this command looks in my case:

Note, I use master instead of IP, becuase we specified the IPs earlier in the /etc/hosts file.

Run this command on each worker node (worker1 & worker2 in our case).

If your kubeadm doesn’t detect containerd automatically, specify the containerd socket with --cri-socket /run/containerd/containerd.sock at the end of kubeadm join ... command.

After the command finished successfully, it will ask you to run this command on the master node:

It will verify that nodes are connected. You should find both worker1 and worker2 lister as nodes: 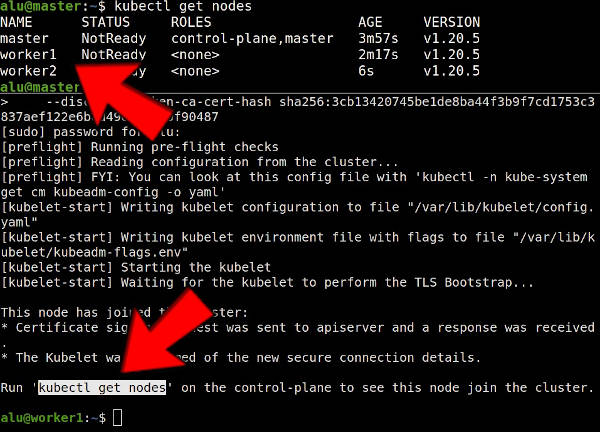 Now, we need to deploy a pod network to this cluster. We will use the Calico network, but Kubernetes offers other options too.

To deploy Calico, run this command on the master node:

And check the status of your nodes:

All nodes should have STATUS of Ready. It may not show up immediately, so make sure to wait a few minutes for changes to take effect.

When you see that all nodes are ready, you start testing this Kubernetes cluster.

The simplest way to test our setup is to create Apache HTTP Server with a pod http-page and expose it via service named http-service with port 80 and NodePort type:

Verify that it works:

Get the node name and port from the output of the command above and run this command:

As the message says, it works!

To make even more tests, let’s deploy an application, scale it to several replicas and check if Kubernetes will self-heal when one of the replicas breaks.

Verify that the deployment was successful:

Scale-up this deployment to 2 or more replicas:

We can check our replicas with these commands:

We can also see more details about this deployment with the kubectl describe command:

You see that we have two desired replicas and both of them are available now.

Now, let’s imagine one of the replicas broke. For example, one of the worker nodes died.

To simulate this, we will kill one of the replicas and see if it is restored by Kubernetes.

Copy the name of one of the pods:

And kill it with the following command:

Our pod has been deleted but Kubernetes created a new one (with a little different name) to replace it and our application is running just fine.

Congratulations! You have a working Kuberbetes cluster with ContainerD as a runtime interface.

You can now use it for learning purposes or as a foundation for your real project. You can scale up by adding more nodes and resources to this setup.

Try Serverspace, if you are looking for a hosting solution for your Kuberbetes cluster. You will be able to double up your first payment with the promo code AVERAGELINUXUSER (Serverspace → Settings → Promo code → enterpromo code).

Average Linux UserFollow I am the founder of the Average Linux User project, which is a hobby I work on at night. During the day I am a scientist who uses computers to analyze genetic data.
« 21 Things To Do After Installing OpenSUSE Get Maximum of Plasma 5 Widgets! »

I have one question:

When I run the curl command. I get the following error message “curl: (7) Failed to connect to k8s-worker-01 port 32150: Connection refused”.

I just figure it out.

how did you solve this problem. I am having the same,

grep calico”. The following is the output. I am not sure how to fixed this. Warning FailedCreatePodSandBox 3m43s kubelet Failed to create pod sandbox: rpc error: code = Unknown desc = failed to setup network for sandbox “6b734e9c0269c454a4e93c32b5d293d6b0a2614423a9355f8a113d98327354ff”: stat /var/lib/calico/nodename: no such file or directory: check that the calico/node container is running and has mounted /var/lib/calico/

please send me a mail on sharif93@yahoo.com.

Hello there, i followed all the steps and it works like a charm. By any chance do you have the steps on how to deploy a kubernetes dash-board and how to make it accessible from out side? Ive seen many how to but all of them runs on localhost, i even want to try reverse proxy it but maybe there is an easy way.