I tested Debian 11 during the last two weeks. There are many great improvements, but some problems still exist. Let me present you everything in this review of Debian 11 “bullseye”.

I was pleased to see that now there is a very clear download button on the main page. 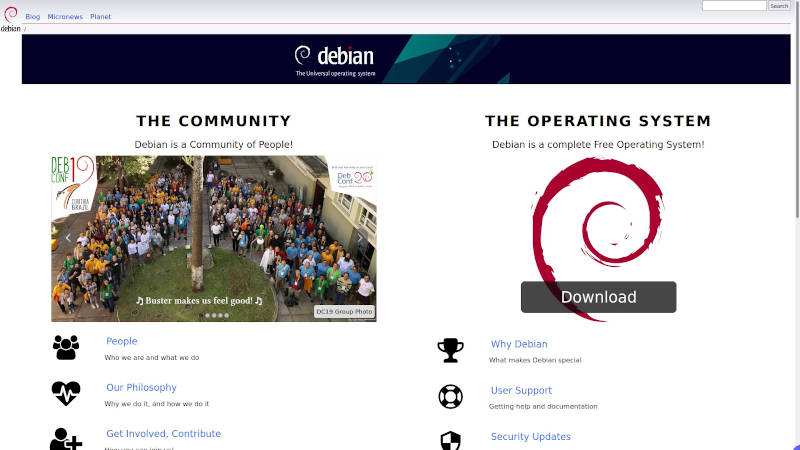 There is also a link to the non-free version of the ISO that includes proprietary drivers. Now, it is much easier to find it than before. But I think it is still not immediately clear what this non-free ISO is. There could have been an explanation that some Wi-Fi cards require proprietary drivers, and you need to use this ISO if your Wi-Fi doesn’t work with the free ISO. That was exactly my case and I had to download the non-free ISO. 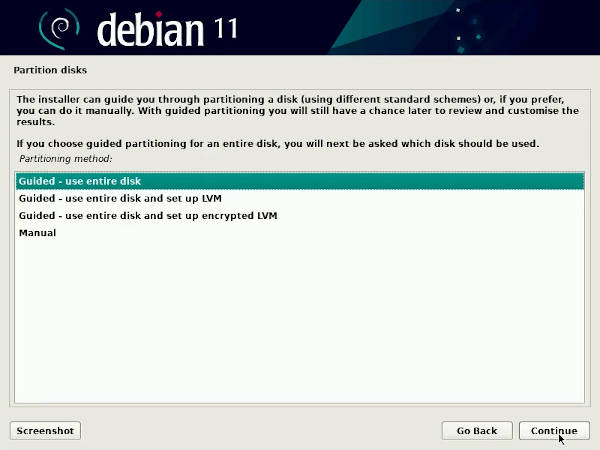 The default installer is still outdated and confusing, especially if you have limited experience with Linux installation. 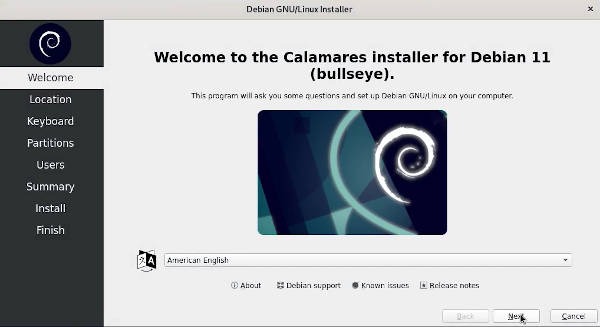 Debian 11 comes with many software updates. The kernel version is upgraded from 4.19 to 5.10. It is the LTS version of the kernel which ensures stability, reliability, and security of your system. This is one of the differences between Debian and other distros such as Ubuntu, for example, which doesn’t necessarily run the LTS kernel by default. 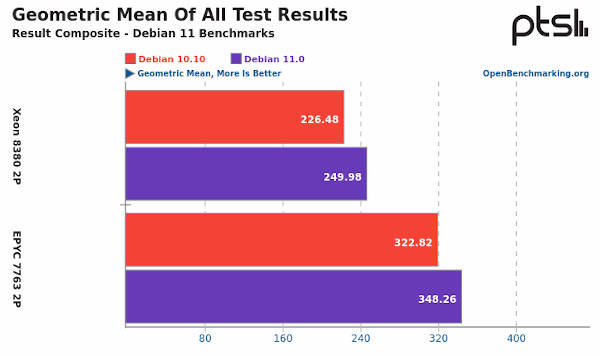 This newer kernel brings a lot of improvements, including better performance on newer hardware. For example, Phoronix reported that Debian 11 is 8~10% faster overall compared to Debian 10. 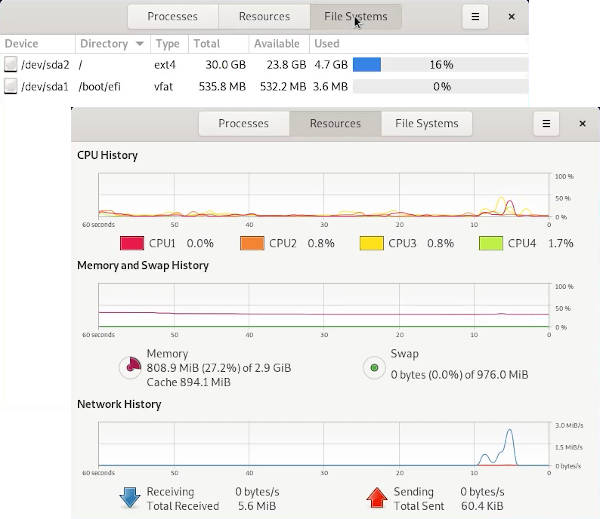 I also checked my Debian 10 review, and it seems that a fresh installation of Debian 11 also takes less space and RAM.

Performance-wise Debian 11 is definitely worth upgrading. 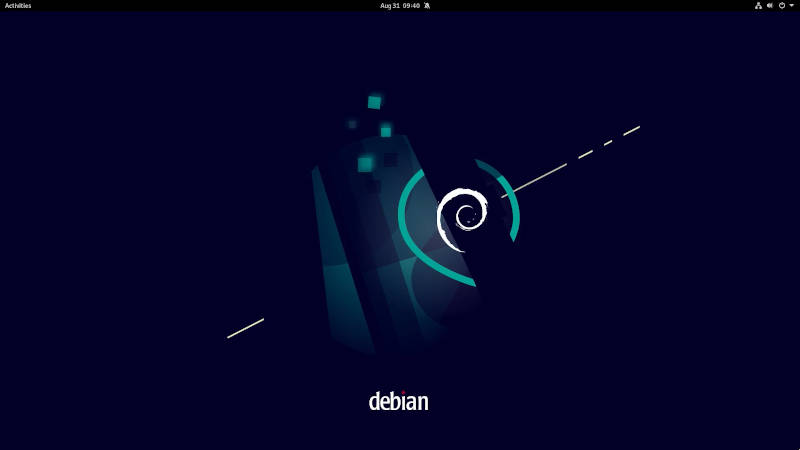 There is no Gnome 40 yet. But I don’t think it is a problem. Those who run Debian on their desktop focus on productivity instead of shiny new stuff. And GNOME 3.38 is perfect for that. I was happy with the GNOME 3.30 in Debian 10 if you have read my review of Debian 10. Now, after more than 2 years, GNOME has improved even more. 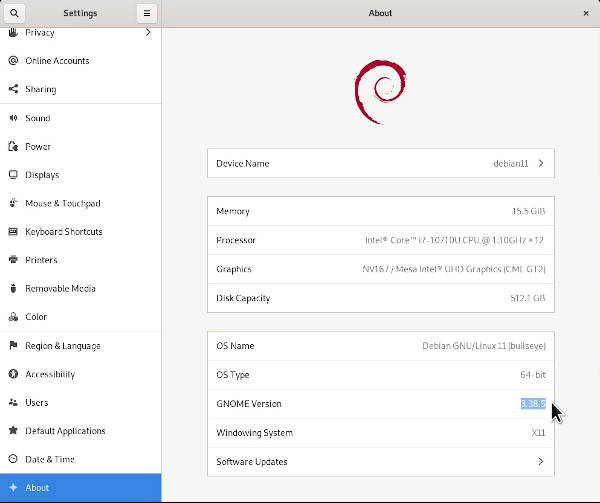 There is no such problem as duplicated Software entries in the Software app, which existed before. LibreOffice resizes correctly, unlike before when it became supper small after exiting the maximized window state.

It is a bare-bones GNOME. Nothing extra is installed, unlike in Ubuntu, for example. And I like that because you can configure your desktop as you want.

Tweaks and Extensions are preinstalled. Using them you can configure the GNOME desktop to meet your needs. The Custom Shell themes extension is not activated by default, but you can easily activate it by installing the User Themes extension:

After that, open Tweaks and you will find that Custom Shell themes are activated.

Now, you can follow my guide on GNOME themes and install any theme you want.

The only small issue I had was that the GNOME Software gave me this error message when I tried to update the system, while everything worked fine in the command line. 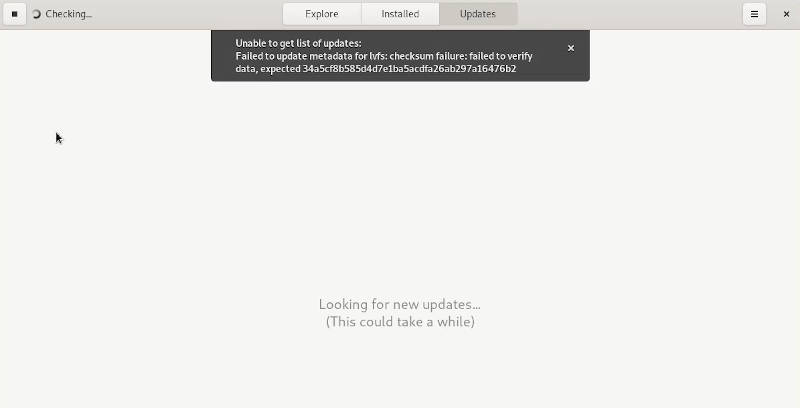 As I said in my previous reviews of Debian, GNOME was problematic in Debian 9, it became usable in Debian 10 and I think it is now perfect in Debian 11.

Wayland has been improved in Debian 11. Synaptic works fine now, while you could use it only in the Xorg session in Debian 10. I have not experienced any glitches or slow-downs. Overall, Wayland feels lighter and faster than Xorg.

However, many applications are still not compatible with Wayland. For example, SimpleScreenRecorder doesn’t work in Wayland. You can replace it with other programs, for example, I use OBS instead. But I think there are also programs which are difficult to replace.

Color picker from the screen still doesn’t work in GIMP and other applications. You cannot choose a color on the screen outside of the program window. This issue exists since Debian 10 when Wayland was introduced. 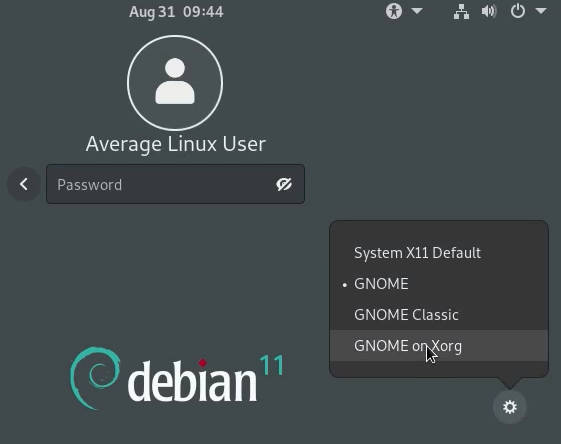 Of course, you can always switch to Xorg at the login screen and everything will work fine. But it would be so nice to have everything working smoothly with Wayland. 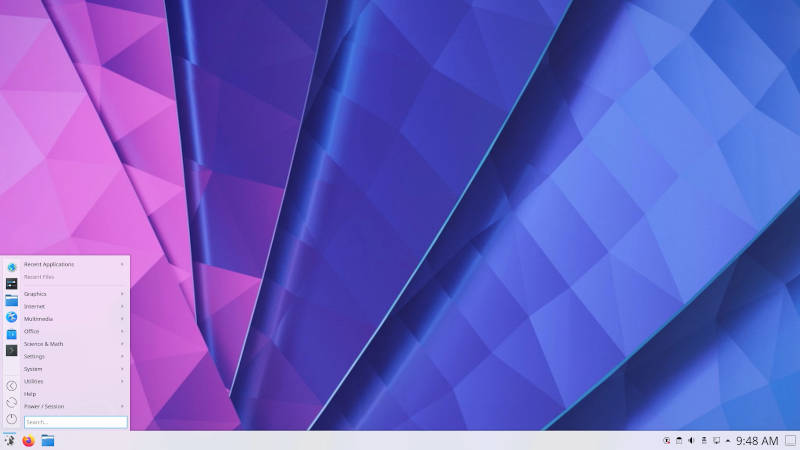 KDE distro was the slowest. I don’t know why. Plasma 5 is generally very fast. As you may know, it is my favorite desktop environment. I run Plasma 5 with KDE Neon as my daily driver. But Plasma 5 in Debian 11 did not feel as fast as it is in KDE Neon. Maybe it is because, in Debian, Plasma 5 includes too many unnecessary apps pre-installed as I have already complained about in my Debian 10 KDE review. Probably, because of all these extra apps, the installation of Debian KDE also takes much longer than the installation of the GNOME and XFCE versions.

There are some improvements in Debian 11 KDE. It is Plasma 5 version 5.20. It is not the latest, obviously, but it is stable, reliable, and has all the features that make Plasma 5 my favorite desktop.

But the KDE version of Debian 11 feels very raw and bloated. It is noticeably heavy and not polished. For example, the login screen has the outdated theme while it could look modern and in line with the Breeze Plasma 5 theme. 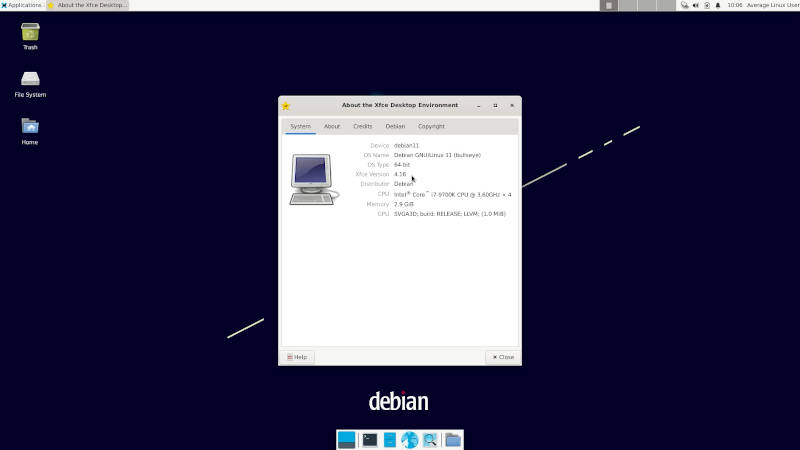 In my previous reviews of Debian, I said that I consider Debian XFCE flavor as the best one. First of all, because both Debian and XFCE are developed slowly and they do not rush for shiny new stuff but rather focus on stability. That’s why while Plasma 5 and GNOME are already outdated in Debian 11, Debian XFCE has the most recent version of the XFCE desktop environment, which is 4.16.

XFCE 4.16 brings many improvements in comparison to 4.12 which was installed in Debian 10. Now, XFCE has better HiDPI screen support and you can choose a scaling factor in the settings. This version of XFCE has improved graphic performance and has better comparability with Nvidia cards. You should also get better support for multiple monitors. It has more GTK3 code that makes it more modern and thus faster. So, you get a rock-solid Debian base and the latest XFCE desktop. This makes Debian 11 XFCE the best XFCE distro in my opinion.

But of course, it is not perfect and it doesn’t look impressive out of the box. For example, you need to enter your username on the login screen, while it could have been configured to show the latest user pre-selected. The desktop theme is outdated and looks like it is from the 90s. But you can fix all these by following my guide on customization of XFCE.

Pros and Cons of Debian 11

Debian is a community project, and it is probably its major advantage. It still keeps that special spirit of Linux as a community. Probably, this is why Debian 11 still supports 32-bits and if you have very old hardware, you can bring it to life with Debian 11.

Debian 11 is a simple and reliable distro that just helps you to make the work done. You won’t get any surprise with it - neither negative nor positive. This LTS release is supported for 5 years. So, you can install it and just focus on your work.

On the other hand, the software in Debian is always a bit older than it should be. You can overcome this obstacle with Flatpak or Snap apps. But this will not give the experience of native apps. Also, you need to have some Linux experience to install and configure Debian 11.

So, my conclusion on Debian 11 is that it is a fantastic distro for those who just what to use Linux on their desktop to make the work done. If you don’t care what version of the software you run, if you do not rush to upgrade to a new version as soon as it is released, Debian 11 is for you.

Update: I got most of my performance back by logging in as Gnome Classic. Cinammon must have a problem.

I totally agree with Felipe after I updated from Debian 10 to 11 my computer became very sluggish and I have to wait a very long time before my system wakes up then the apps are very sluggish for a while and then eventually they perform normally until the computer sleeps again. Debian 10 was a dream so it’s highly frustrating to have to wait so long to use my PC now. I am running cinnamon on an AMD 64 PC with 16 gigs of ram and a cinnamon desktop, any suggestions would be very helpful.

I’ve tried many other distro’s and always come back to Debian. It is a rock solid, no bullcrap distro that just let’s me focus on getting the job done. Besides a browser, vscode, spotify, vlc and virtualbox. I don’t really do much else on it. Perfect. Debian 10 has given me years of love previously, now Debian 11 will give me a few more years. Love it. The best OS there is.

Hi! I have made the upgrade from debian 10 to 11. It worked, but since then my applications, and the OS, is slow, applications are very slow to open and work. Could you help me? Love you videos and this page. Thanks.

I accidentally did apt update in a command line and magically that improved my Debian 11 performance. You might give it a try. My theory is that my in place update left something not updated and caused my machine to be very slow and unresponsive after a sleep. By doing the apt update, it updated something.

strange magic indeed. next time accidentally include “&& apt upgrade”… could be even more wonderful ¯_(ツ)_/¯

Thanks I will try it