How Linux Is Shaping The Future Of Automatic Vehicle Engineering

Did you know that Linux is a common name in the automotive industry? Here are several examples of how Linux is influencing the future of self-driving cars 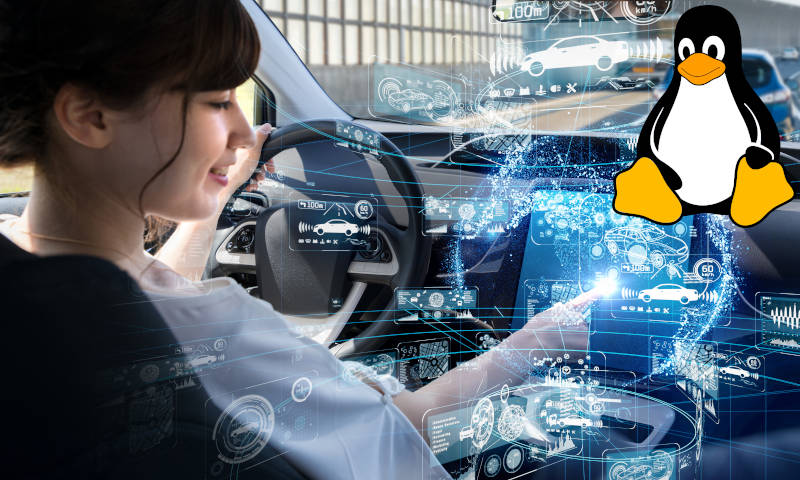 Linux is a common name in the automotive industry. There’s a good chance your tech-loaded car is running on this OS (operating system), whether homegrown like Tesla’s or using Automotive Grade Linux (AGL) like most brands. Car manufacturers understand that people consider intelligent systems as crucial in looking for the right vehicle as performance.

But why Linux and not the more well-known Windows or Mac? It’s difficult for the latter two to compete with an OS that’s open-source, more secure, and retrofittable to older automotive systems. It doesn’t mean that it’s insusceptible from hacking or viruses, but it’s the most cost-effective way to introduce state-of-the-art features in today’s vehicles.

As more Linux-based systems go online, the future of Linux will only get brighter from here. Here are several examples of the OS influencing how tomorrow’s cars will work:

Regardless of how you feel about a future where you don’t have to drive, that future’s coming fast, if not already here. Google’s self-driving car in 2009, while not the first (driverless technology has been in development since the 1970s), set the stage for others to take interest and develop this tech further. Fast forward today: every car Tesla pumps out now can mostly drive itself.

At the heart of every autonomous driving system in service is machine learning. This involves making an algorithm by which the machine learns from everything it registers and thinks of ways to enact those lessons in the best possible way. Think of it as Terminator’s Skynet (minus the part where it wages a genocidal war against humanity).

To better understand how vital machine learning is, you need to understand self-driving cars down to their nuts and bolts. The technology consists of five components.

Machine learning plays a critical role in ensuring these components work smoothly. It must collect massive amounts of data on its environment to make safer decisions, even mitigating human error that would otherwise cause road mishaps.

Linux has been leading the way in autonomous driving technology since the Ubuntu-based Google Chauffeur operated the prominent self-driving car in 2009. One of its notable achievements came three years later when it brought a legally blind man for a ride around town without ever touching the controls. This shows the potential self-driving cars have for the future of road safety.

The technology is still far from perfect, though, as driver input is still required for many situations. There’s also the lack of a complete toolkit for developing such systems, resulting in manufacturers struggling to roll out vehicles equipped with them. There’s some special info about Machine Learning Operations (MLOps) toolkits and other related stuff that may pique your interest.

Of the myriad of benefits working with Linux offers, perhaps the most important is that it’s open-source. But the ironic story is that its creator, Linus Torvalds, never meant for it to be and compete with the two giants. Out of his passion for programming, he publicly released Linux for people to comment on it and nothing else.

Even as Windows and Mac hopped on the open-source bandwagon, Linux has been the household name in the scene. There’s no shortage of Linux-based software in use in various industries today, including automotive. In this case, its application resulted in a joint effort to construct a framework for automotive engineering known as AGL.

Spearheaded by The Linux Foundation, AGL aims to create a Uniform Code Base (UCB) that car manufacturers can adopt into their intelligent systems. Its first release was a Tizen-based UCB in 2014, though primarily as a demo. UCB 10.0, known as Jumping Jellyfish, is the latest release as of this writing.

Since each manufacturer has different needs, the UCB is designed to provide only up to 80% of the necessary features, with the rest provided by the manufacturer. Among UCB features include:

Toyota, a member of AGL, took the first step to integrate it into a production vehicle, particularly the 2018 Toyota Camry. The code is present in the model’s telematics, instrument clusters, heads-up display, advanced driver assistance systems (ADAS), and the Entune 3.0 in-dash infotainment system. A year later, Mazda, another member of AGL, put UCB in the 2019 Mazda3.

With more manufacturers expressing their interest, it won’t be long before AGL becomes standard in future makes and models.

According to the World Health Organization, an estimated 1.35 million people worldwide die from crashes and other road accidents. On top of that, between 20 and 50 million more suffer non-fatal injuries, often resulting in drastic life changes. Who wants to lose a job because of crippled limbs from a close call?

Given these alarming figures, the United Nations included road safety as an indicator in fulfilling the 17-point Sustainable Development Goals (under Goals 3 and 11). As the public sector struggles to achieve as many goals as it can by 2030, the private sector contributes to the cause. In the case of the automotive industry, it takes the form of The Linux Foundation’s ELISA Project.

Launched in 2019, the Enabling Linux in Safety Applications (ELISA) Project is somewhat similar to AGL. But whereas AGL focuses on infotainment systems, ELISA is concerned with building a toolkit to assist manufacturers in creating Linux-based safety features. Again, open-source plays a huge role here. This is because these features can be improved to reduce the risk of system failure.

ELISA also comes at a time when the public is still mostly hesitant about riding in a driverless car. A Partners for Automated Vehicle Education survey in 2020 revealed that nearly half of Americans said they wouldn’t get in one, with one in five saying it would never be safe. Experts believe that public distrust will hamper the rollout of such technologies in the coming years. So how does ELISA plan to allay such skepticism? The project’s primary objectives include:

Considering that it’s relatively new, the project has yet to produce something to put in a production car, unlike AGL. However, it’s begun its first assignment based on two other Linux-based projects: SIL2LinuxMP and Real-Time Linux. Also, it’s been enjoying support from a growing number of companies and investors from various industries.

If Linux-based automotive systems have a direct competitor, it’s most likely Android Automotive (AAOS). Despite a slow rollout, the market analysis estimates that AAOS be the dominant in-vehicle infotainment system by 2030. At the rate it’s going, it’s poised to trump QNX by 2027 and AGL by 2029.

Whether or not that’s the case, Linux will remain a recognizable name in the future for two reasons. First, Android itself is developed from a modified Linux kernel, owing to the latter’s open-source nature. While not technically a Linux distribution like Ubuntu, Android is part-Linux in a way. Making it open-source doesn’t change that fact (unless Google makes significant code changes).

Second, and perhaps more important, is the growing collective within AGL. The project has more than 150 members to date, with some of the largest contributors being car brands, such as Toyota, Mazda, and Ford. As mentioned earlier, more brands are expressing interest in integrating AGL-based features into their models.

According to Philip Hunter, a research fellow for Rethink Research, Android is more likely to run secondary to a Linux-based OS in future cars via virtualization. That’s not necessarily a bad thing for both OSes, combining Android’s yearly updates with Linux’s enterprise-scale adaptability. Car manufacturers may end up putting both in their vehicles.

The average owner might not know about Linux’s role in developing the stuff that came with their car. Nevertheless, rest assured that it’s working behind the scenes integrating vital technologies.

As this article has discussed, the Linux name holds more weight in automotive engineering than it suggests. While it’s not more publicly known elsewhere, this open-source software makes nearly every modern convenience possible–from touchscreen interfaces to self-driving systems. Given its creator’s intentions, Linux may as well stay that way.

There’s no reason for initiatives, like AGL and ELISA, to slow down, given the support companies from various industries have thrown at them. Like any innovation, these projects will face scrutiny, if not skepticism, from the public. It’s all the more reason their development must press on, helping explain their potential in making travel safer and more comfortable.

Automotive technology, in general, has yet to reach its peak. The following years will undoubtedly be exciting for people in the market for a new car, with Linux being at the center of such growth.