Overview of the best commenting systems for your static website

Why static websites have no built-in commenting system

AverageLinuxUser.com is a static website built with Jekyll, meaning the content had been built on a server and is ready for the user immediately. On the other hand, WordPress is a dynamic website that fetches content from a database on each request making it slower than a static website. However, CMS-es for dynamic websites like WordPress often have a built-in commenting system, while the static ones - being static, do not have one. Thus, it’s necessary to use some third-party solutions.

This article compares the most popular third-party commenting systems for a static website.

Before I proceed with the discussion, I would like to give you some background that led to this article. For the past three years, this blog was using JustComments as its commenting system. JustComments was serving me amazingly well. This is the only screenshot of JustComments I was able to find:

Unfortunately, the project was recently shut down, so I had to scout out a new commenting system. Along the way, I’ve explored a fair amount of commenting systems, their features and drawbacks. I am now summing up my experience in this article to help you make the right decision. 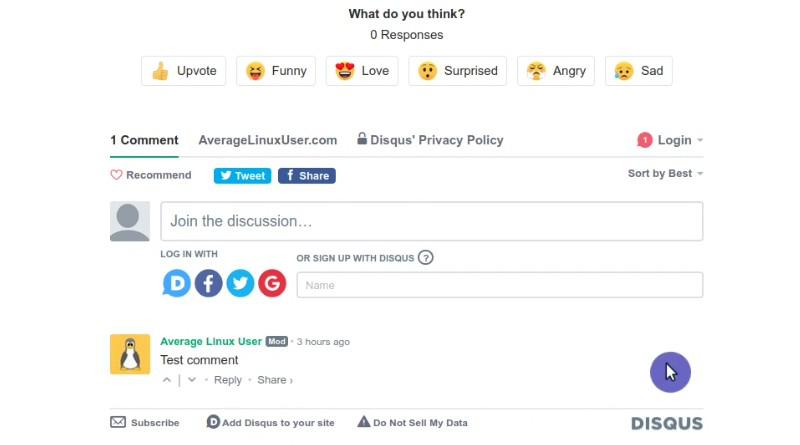 Disqus is the top dog of commenting systems that’s been here over for a decade. It has a massive userbase and is actively developed. Disqus has plugins for almost any website/blogging platform you can imagine, so you don’t need to mess with the code.

Regarding features, Disqus supports the vast majority of features that you would expect from the most popular commenting system:

One of the Disqus’s greatest features is its dashboard that allows us to manage comments from one central place. I particularly value the option to reply to comments right from the dashboard. It saves a lot of time if you receive many comments.

As with everything, Disqus, although the most popular commenting system, has some significant drawbacks. While out of the box, Disqus looks nice, it’s going to look pretty much the same on every blog out there using it since it has limited customization options.

Moreover, the biggest red flag, in my opinion, is that it’s very privacy intrusive, especially if you use the free version of Disqus.

Uncovering the Disqus data machine: @disqus shared the personal data of tens of millions of users without them or the websites knowing about it. thread - 1/13 pic.twitter.com/bLW4Gl2Rhf

It loads various Ads and Trackers which is not only privacy-intrusive but also results in poor user experience because of its heaviness. On the bright side, Ads can be disabled if you opt for the PRO version.

On that note, Disqus also does not allow users to leave anonymous comments. Instead, it’s called “guest comment”, but a user still needs to enter a name and email. All of this has sparked a lot of controversy over the recent years and many people have left this commenting system.

Nevertheless, most of the users either do not even know what Disqus is, or it is acceptable for them to use it: 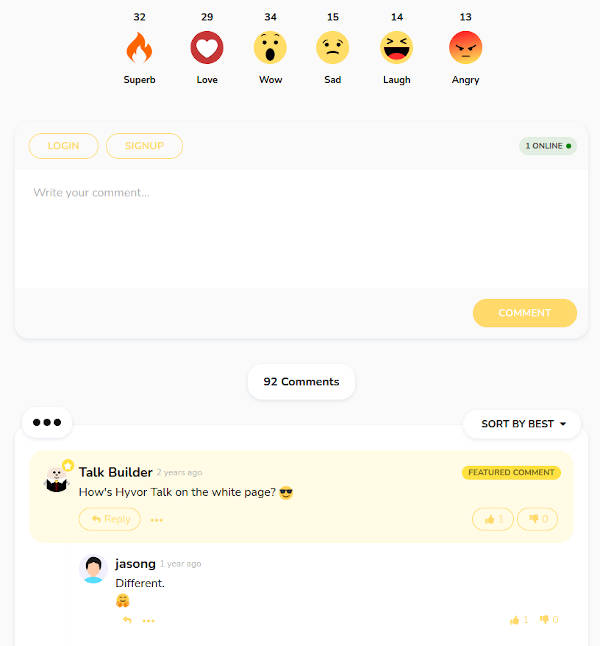 Hyvor Talk is another popular commenting system. It was launched a few years ago but quickly rose to the top due to its many features. If Disqus wasn’t your cup of tea, but you would still like to rely on a strong platform that is not privacy intrusive, then Hayvor Talk might be for you!

Here are some of its core features:

And just like Disqus, Hyvor Talk has an equally amazing dashboard as well.

The only drawback that I’ve found with this commenting system is that pricing can change at any time. When they started the project, they had a free and paid version. A paid version started at $45 per month, which is a lot for a commenting system. Many users (including me) have signed up for a free version and suddenly, after a few months, were forced to pay - or leave, which is not fair. Who knows, maybe their cheapest option of $5 will get more expensive in the future. 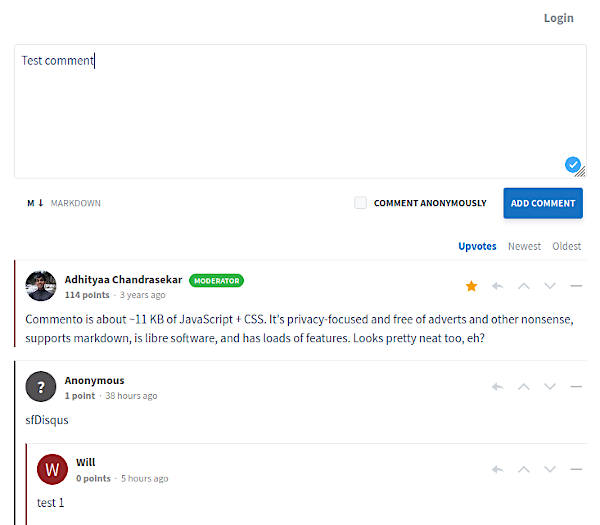 In terms of features, Commento is very basic compared to Hyvor Talk. So if you are looking for fancy stuff, Commento does not deliver that.

I also think Commento is the best-looking commenting system from this list.

Commento does not have a dashboard. Instead, you receive each comment for moderation on email, but no central place to review and reply. 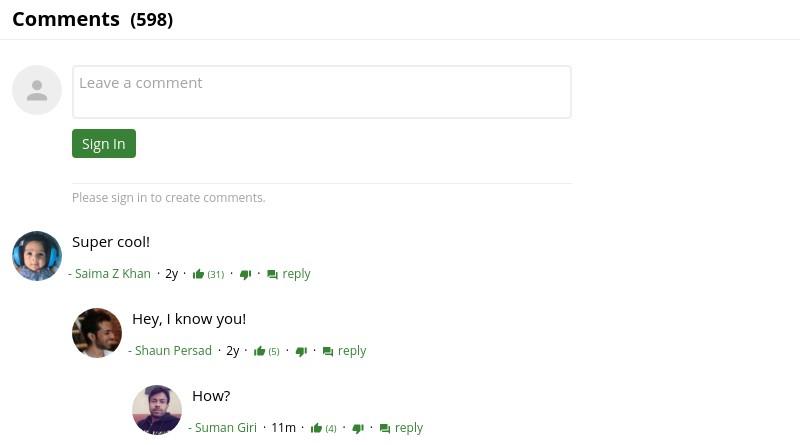 CommentBox is another commenting system that I would put in the same category as Commento. Its slogan pretty much sums it up - “No ads. No Tracking. Just Comments.”

CommenBox is a privacy-oriented commenting system, but it does not have any features - just comments. Optionally, you could pay for moderation features.

On top of that, it seems that the project is not developed anymore. I’ve tried to reach the developer multiple times, but have not received a reply. The last update was almost three years ago (2018), which is a warring that stops me from using this commenting system.

FastComments brands itself as “Commenting Done Right” and it might be just right for you. Launched in 2019, it has progressed a lot and offers a decent set of features:

I also like its moderation dashboard! The only thing that I would like to have is an option to reply right in the dashboard without going to the thread of each post. 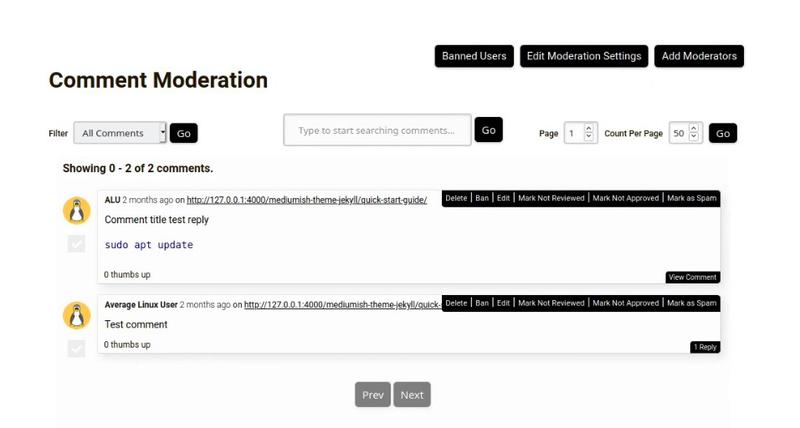 Another positive feature of FastComments is that it’s affordable for large and mid-size bloggers. For only $4.99, you can have up to a million views per month, while comparative views on Hyvor Talk could easily triple and even octuple the price (a million views would be $40 on Hyvor Talk). 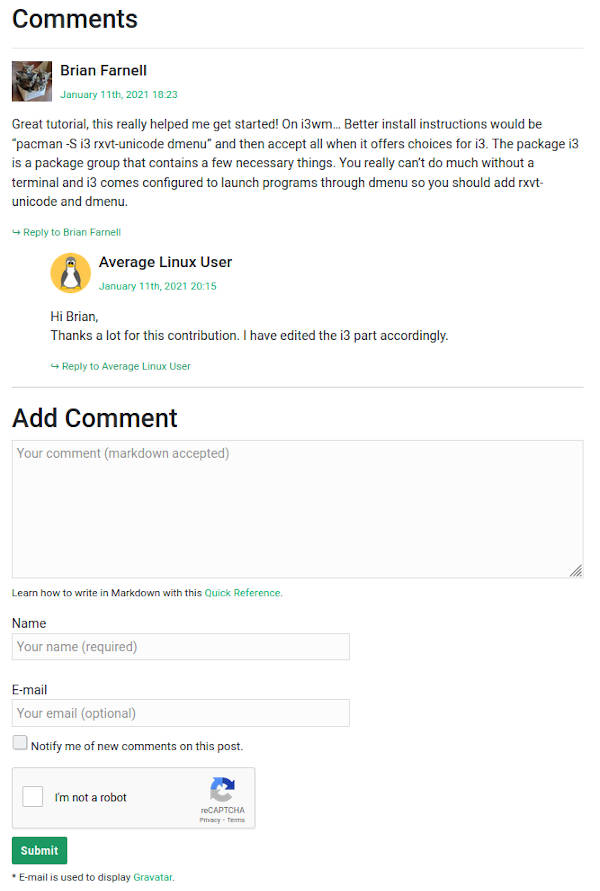 This is the commenting system I decided to go with. You can also see how it looks and works below this post.

Before I dive into what Staticman is, I want to issue you a warning. If the words “pull request” and “Github” are some alien words to you, skip this commenting system.

Staticman is one kind of commenting system on this list. It’s a completely free commenting system for developers who want to have full control over their comments. The way it works is that each time someone submits a comment, there is a bot which submits it to my site’s repository on Github causing a rebuild with this comment included. Each comment is static content - embedded right into the page.

Out of the box, Staticman includes very basic features:

The main advantage is that it is a free option and you own the comments on your website. It is also extremely flexible in design and functionality but you need to know how to code. There is no moderation dashboard, although you can build one if you wish and have time to spare.

I will publish the code of my Staticman implementation in a separate post. So, subscribe using your email or RSS reader. I will also share the code of a Staticman dashboard if I ever write one.

The commenting system similar to HyperComments except that it’s completely free for websites with less than a million views per month. In addition to this, it’s very customizable and offers niche features such as community profiles, badges, awards (similar to Reddit). It is a worth-looking-into option. I discarded this option because it has no anonymous comments and offers only pseudonymity.

The commenting system with the ability to attach images, video and even presentations. It offers fancy features such as moderation and real-time comments as well. HyerComments are paid and don’t offer a free plan.

All-in-one commenting system & forum with powerful features. I would recommend it if you have quite a large audience. (i.e. million+ views per month). But with great features comes a great price.

Free, nice-looking, but privacy-intrusive and limited to Facebook users.

Very lightweight commenting system with a basic design, and “Pay what you can” pricing policy.

An open-source commenting system similar to Staticman except that it uses Github issues instead of pull requests. It’s develop-oriented, and users need to have Github account to comment.

Isso comments is a very basic and lightweight (12kb gzipped) commenting system with the ability to upvote/downvote comments. It is a self-hosted web application written in Python with the SQLite backend.

A self-hosted alternative to Disqus written in GO and Preact. Offers moderation, notification, custom styles and is completely free.

An open-source forum-like commenting system backed by a company Vox Media. It can be self-hosted, doesn’t have ads and features moderation dashboard.

In this post, we’ve explored and discussed the pros and cons of some of the best commenting systems out there as well as some niche ones.

Disqus has been on the scene for a while and has tons of features. However, if privacy is your concern and you need a light commenting system, you might want to skip this one.

Hyvor Talk is the most feature-rich commenting system. If you don’t mind the price and you like its interface, then you look no further.

Commento is the best looking in my opinion. But it is expensive and doesn’t offer the right value for the price.

CommentBox is a nice minimalistic commenting system, but it seems that it’s not developed anymore.

FastComments is a rapidly progressing commenting system. If you like how it looks and believe in its developers, I would recommend it.

Staticman is a commenting system for developers who want to have a full control over their data and have a spare time to support it.

The information provided in this blog is very useful.